Terry's birthday was Tuesday.  Terry, Valierie and I went to Chop House for lunch.  They have really good salads.  Terry got a steak salad, Valierie got the salmon salad (which was awesome!), and I got prime rib vegetable soup.  We went back to the office where they had a birthday party for all of the people who had birthdays in June.  Terry and Bro. Burks had June birthdays: 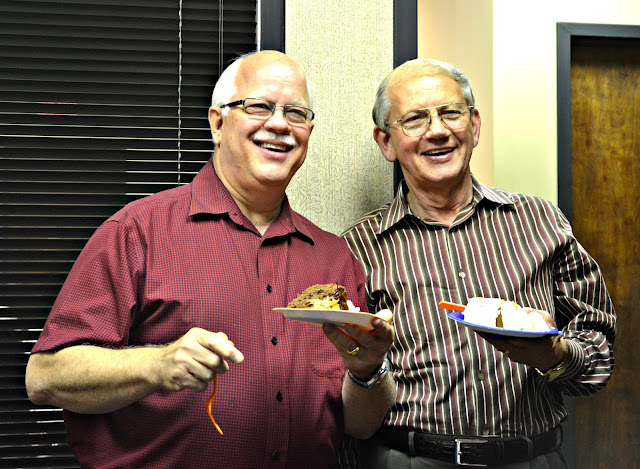 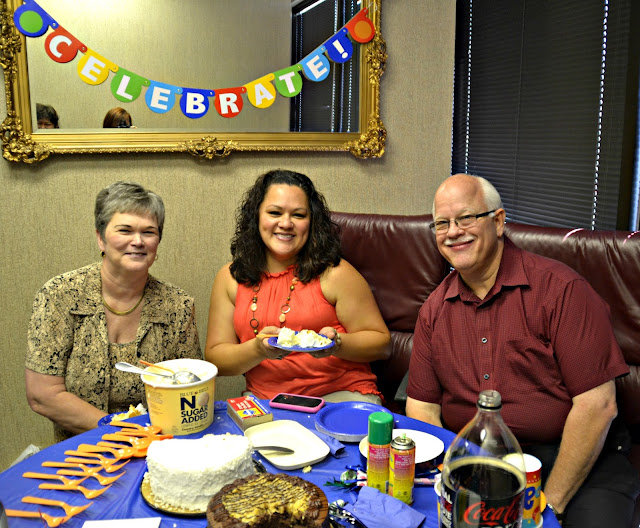 They had chocolate and coconut cakes but also had sugar-free ice cream for Terry to balance things out!

That night, our family went to Outback to celebrate Terry's birthday.  We were a little disappointed in our meals.  Their steaks did not seem to be the quality that they used to be.  But, our time together was great! 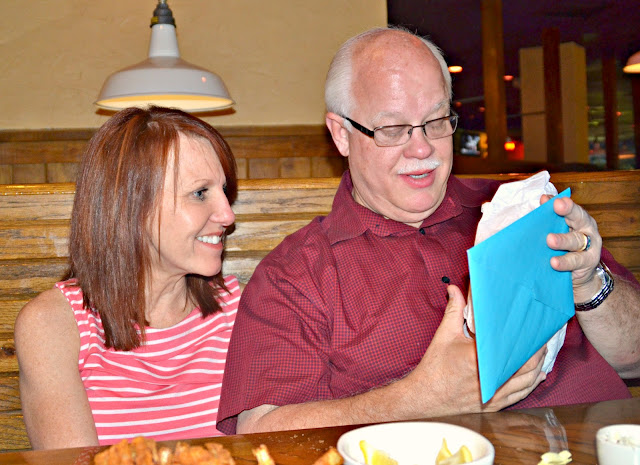 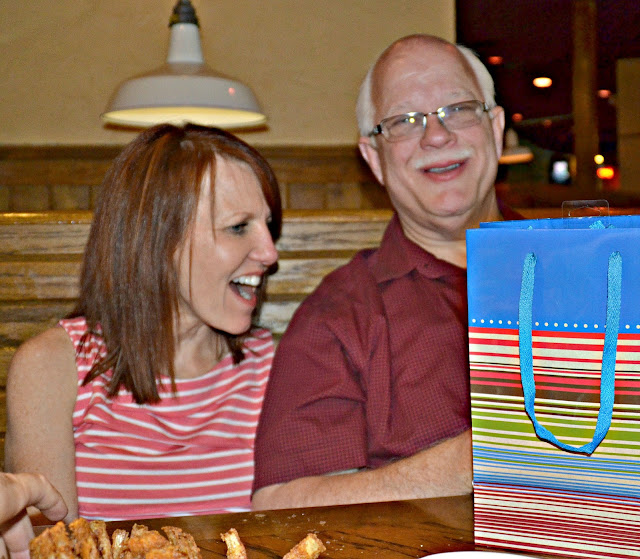 Rachel gave him a framed picture that was taken of them on Father's Day.  I am sure it will be displayed in his office somewhere. 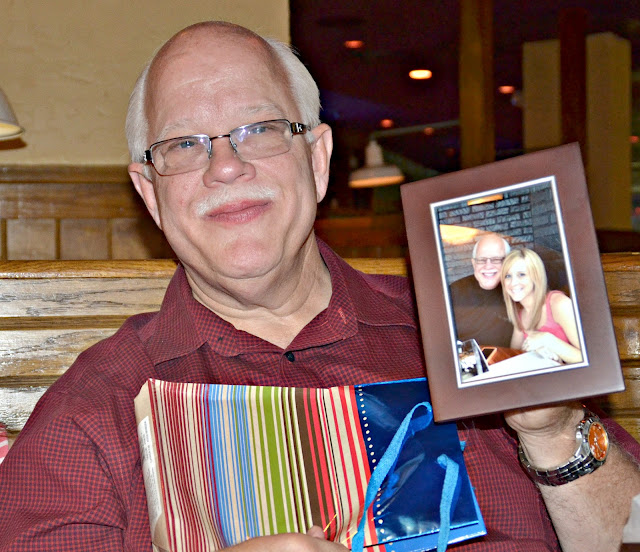 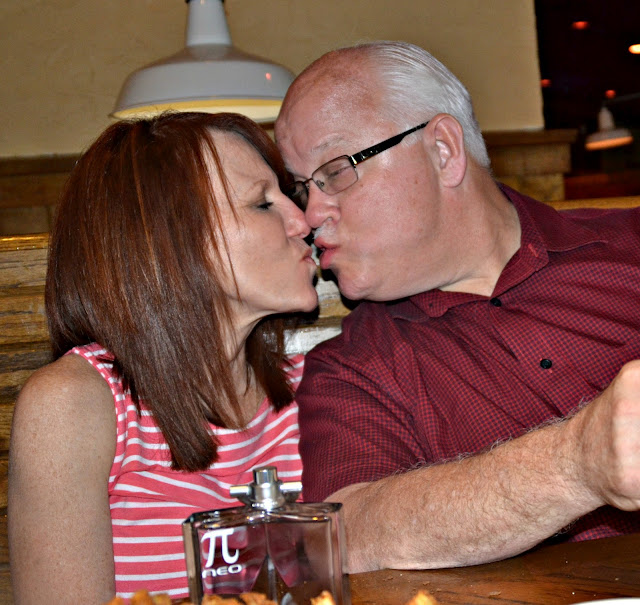 So, now for six months Terry is a year older than me!

My cherry tomatoes are finally coming in pretty good.  The leaves are really looking bad, though.  I don't know if that is normal or not. 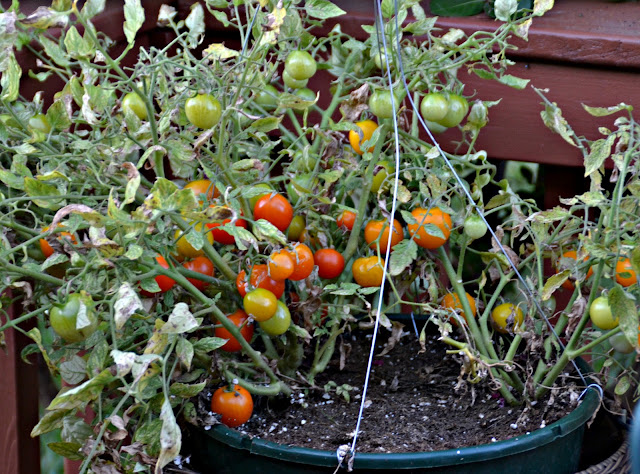 But the tomatoes are beautiful! 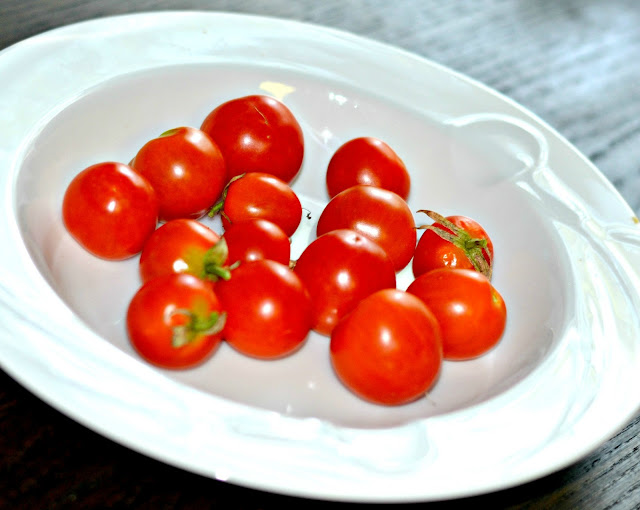 Rachel has been giving me lots of squash.  Since I had some tomatoes I sauteed squash and cabbage, added a few tomatoes, seasoned it with garlic and seasoning salt, and served it over noodles with parmesan cheese on top.  Definitely not a Terry kind of meal, but he wasn't home and it's just my kind of dish. I've been a picture-taking mood lately, so a few more pics of Bentley: 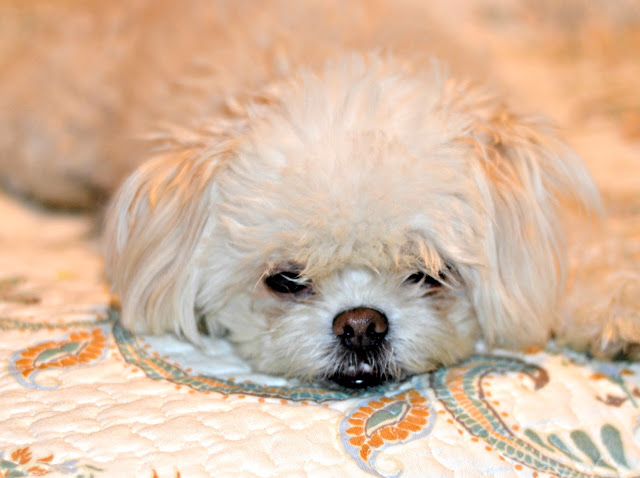 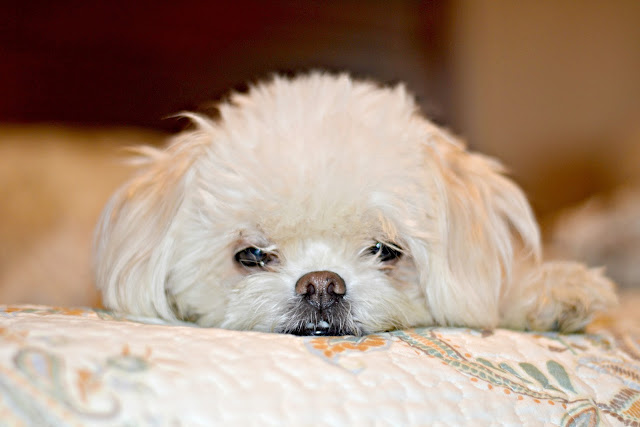 I am loving summer!!  How about you?
Posted by Blissfully Blessed at 6:56 AM No comments:

I went to an auction on Saturday with Michele, her daughter Laynie and their friend Tamara.  I love auctions, garage sales, thrift stores, you name it.  This was the estate of an 80-something year old woman.  She had SO much stuff.  There's no way you could have displayed it all in three houses! 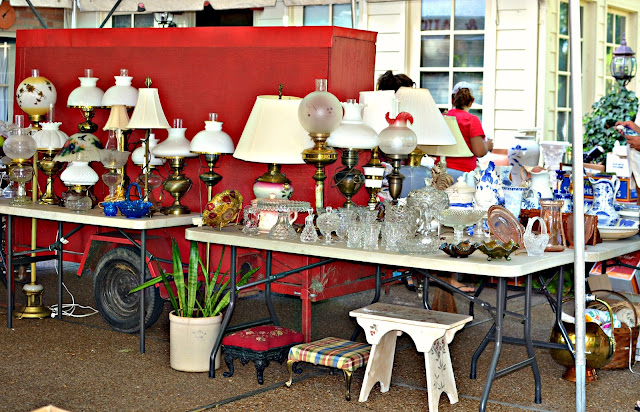 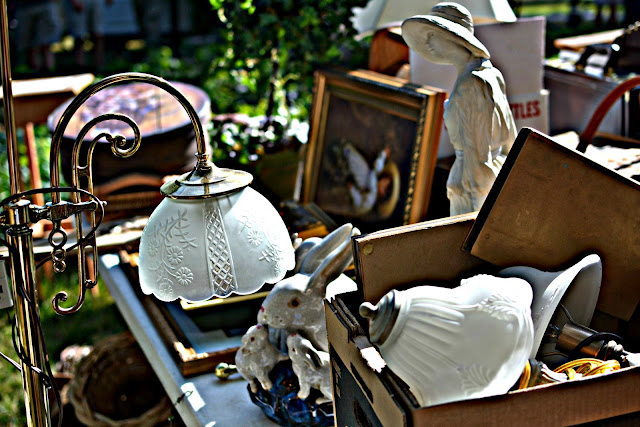 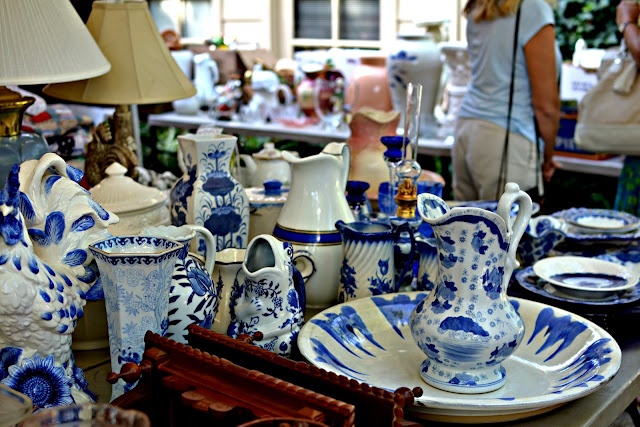 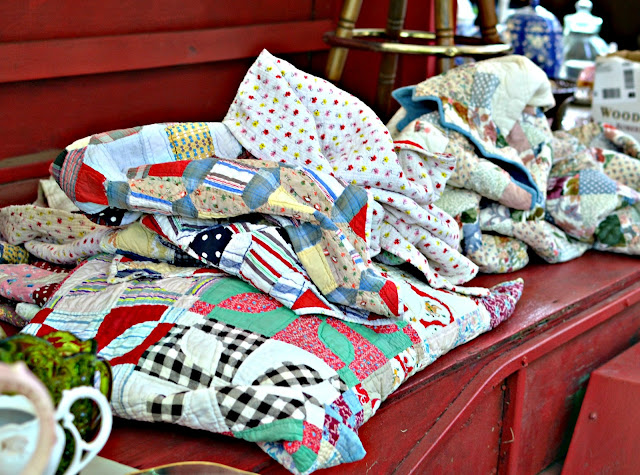 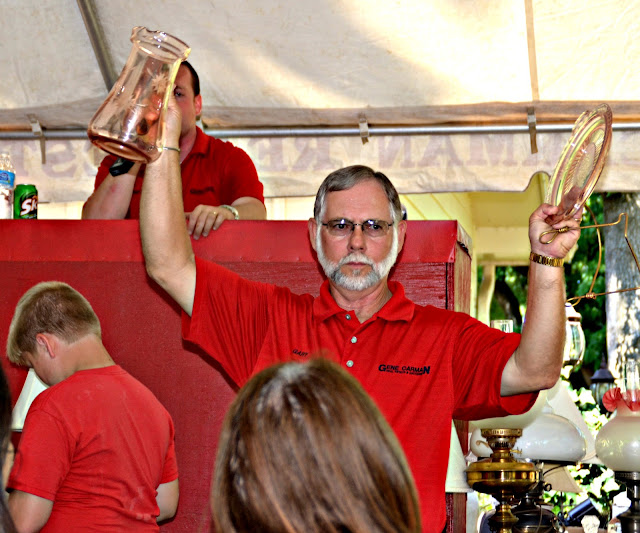 ﻿
﻿When I got home, I checked my garden and had some ripecherry tomatoes (finally!!).  They didn't last long when Terry got home! 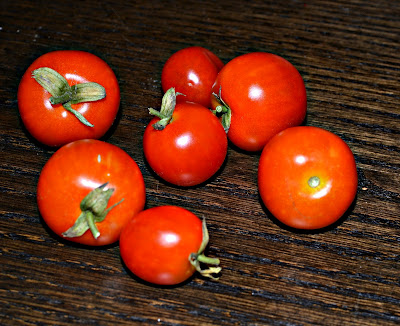 I made me a salad of cucumbers, tomatoes, my fresh basil from my deck and raspberry vinaigrette dressing.  It was so yummy!! 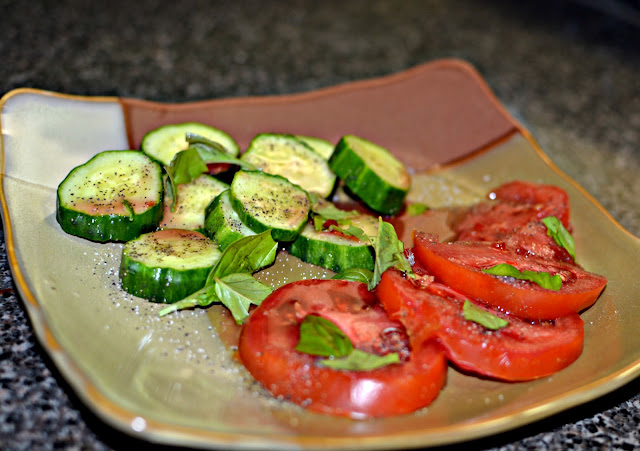 On Saturday afternoon, we drove to Columbia for a reception they were having for the Blythes who have pastored there for 37 years and are now retiring.  It was awesome to hear their church members get up one after the other and pay tribute to the Blythes.  After 37 years, they are still so loved and respected...that speaks of their integrity.

On Sunday morning, we drove to Humboldt to install the new pastors there, Bill and Jessica McCoy.  Their daughters, Faith and Kristen, were there for the day as well.  It was a great service, and then we went out to eat with the McCoy family.  Have you ever met someone that you just knew you "clicked" from the moment you met them?  Well, that's how it was with this family.  It was really like we had known them for a long time.  We had a great time!!  Faith and Kristen live in Brentwood, so we are all going to meet up in Cool Springs and hang out some time.  We are SO happy to have them in Tennessee!!
Posted by Blissfully Blessed at 8:51 AM No comments:

We had the privilege of being at the church where we pastored for 22 years yesterday for Father's Day.  They are still without a pastor, and Terry preached.  It is always great to visit, because we have so many friends there that we don't get the opportunity to see very much.  Valierie, who is Terry's secretary now, leads worship.  As usual, it was awesome! 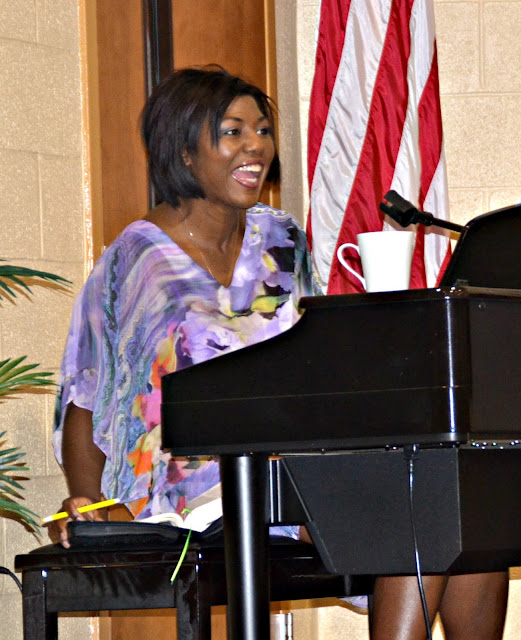 Terry spoke to the fathers today, challenging them to be Godly leaders and examples to their children and family. 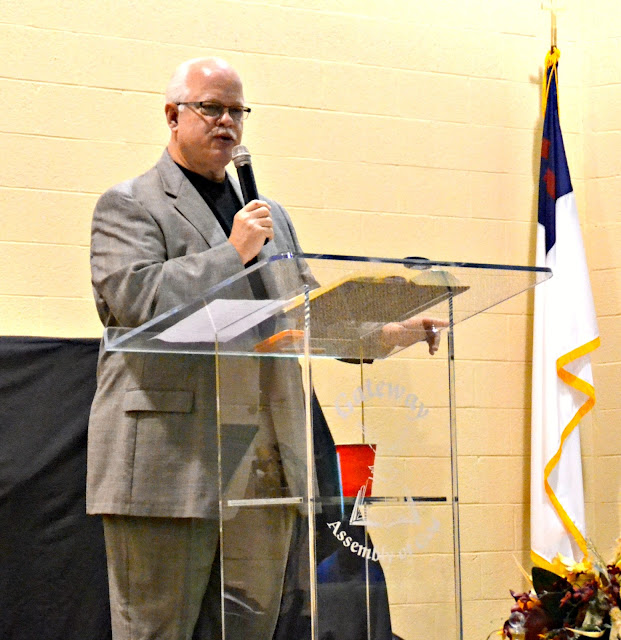 After church, we all went to J. Alexander's, one of Terry's favorite restaurants.  We had a great time!

Terry is a very low-maintenance guy.  It is hard to surprise him because he is very basic and wants the same things when it comes to gifts.  Since Rachel is a hair stylist, he always wants his favorite hairspray:﻿
﻿

After lunch, Terry and Michael went to a baseball game in downtown Nashville.

Terry is and always has been a devoted dad and Godly example to our children.  He has never been "preachy" to our kids...he has just lived the life in front of them.  The saying "actions speak louder than words" is so true.  The Terry other people see is the same Terry we have always seen at home.

I'll sign off with a picture of our little Bentley:

Posted by Blissfully Blessed at 7:33 AM No comments:

I planned to have a raised bed garden this year.  I bought two 4x4 ones that you put together, and I was going to join them and have an 8x4 garden.  Well, we have been so busy that it never got put together.  So, instead I planted my green pepper plants and tomato plants on the side of the house.  I bought bigger plants and some small ones as well.  This is them about a week or so after I planted them:

I actually got the idea of a raised bed garden from Rachel.  Josh built her a nice raised bed.  I went to her house the other day, and this is her garden: 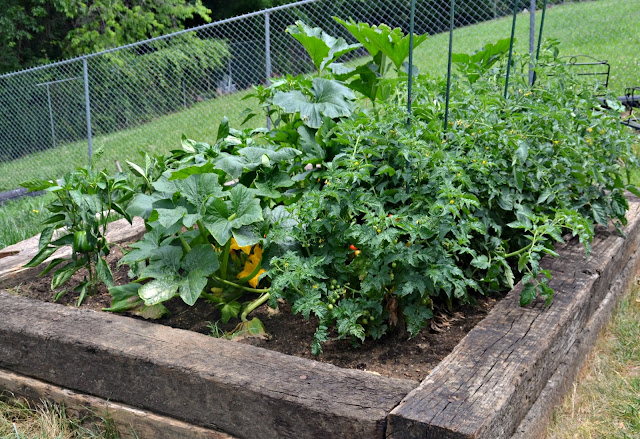 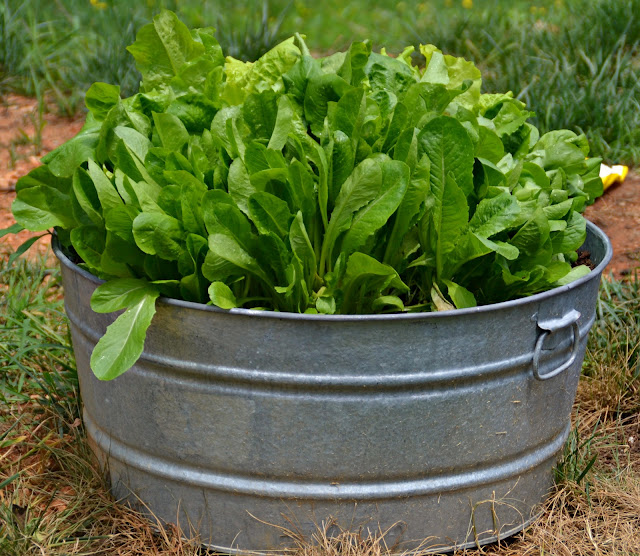 I had to really try hard not to be envious of her garden...it looks SO good!  Anyway, we actually picked green peppers, yellow squash, zuchinni, tomatoes and lettuce from her garden the day I was there and had a salad made from everything out of her garden.  It was SO good!

But, now a few later, this is how my garden looks: 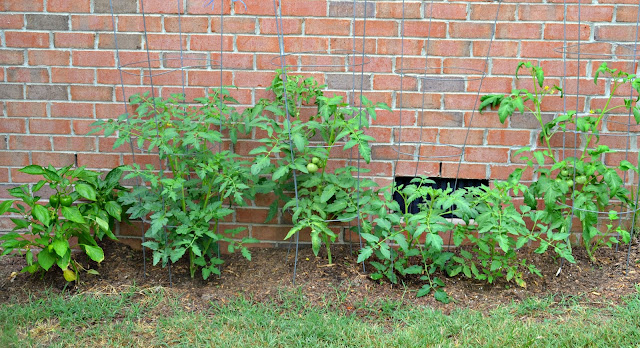 I know it's not as pretty as Rachel's garden, but I am very excited about it!
﻿﻿

Posted by Blissfully Blessed at 10:04 AM No comments: 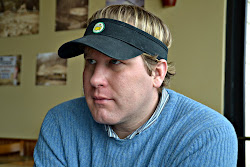 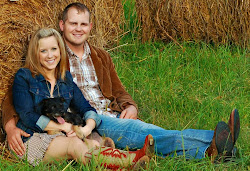 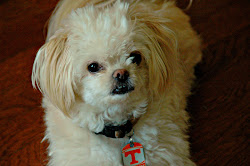